From Pumpkin to Crystal Carriage — Powerful Writing for Fiction

“Don’t stop, now!” and “Sequel, please!” … Hallmarks of a reader’s 5-star experience and precisely the 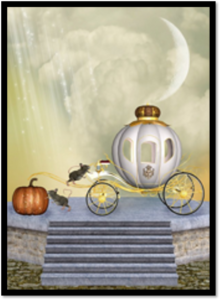 reaction authors hope to elicit. This magic doesn’t just happen. It requires more than an intriguing plot, captivating characters, and exquisite settings. So, what is the pixie dust? Simple – Powerful writing for fiction!

Powerful writing keeps the reader hanging on every single word (double drum beat for emphasis) from that all-important opening line to the story’s conclusion. Stated otherwise, avoid composing “a swimming pool book,” one in which the reader can scan a line or two on the page to get the drift. If reading while floating in the pool and the book falls in … no big deal!

The foundational principle in my award-winning book “Write to Influence!” is to make each word count and every second of the reader’s time play to your advantage. Why? Everyone is busy! The author who best leverages the reader’s time usually wins. My writing strategies and Word Sculpting Tools are usually associated with non-fiction – marketing, resumes, submissions for grants, personal performance reviews, essays for college applications. Surprise – powerful writing for fiction is equally relevant!

To enthrall the reader, the author should strive to infuse maximum meaning into minimal words. Renowned author Daniel Silva is a master, as exemplified by these lines from his book, “The Heist”:

A longer sample of Mr. Silva’s writing is presented below, contrasted another author’s paragraph. In the context of “know your audience,” both compose for similar demographics. Thus, this comparison is valid – in the vernacular, apples to apples.

In Mr. Silva’s paragraph below, each word is evocative. His depiction is full-bodied like a fine wine, rich like a gourmet meal. The reader savors his scene:

Early that morning, Venice lost yet another skirmish in its ancient war with the sea. Flood waters carried marine creatures of every sort into the lobby of the Hotel Cipriani and inundated Harry’s Bar. Danish tourists went for a morning swim in the Piazza San Marco; tables and chairs from Café Florian bobbed against the steps of the basilica like debris from a sunken luxury liner. For once, pigeons were nowhere to be found. They fled the sunken city in search of dry land.

Now, consider this sample, which I present in the format BEFORE and AFTER to illustrate my writing methodology.

BEFORE: Inside the storage room, he was staring at a blank stone wall with wide mortar seams. But if one looked more closely, there were two holes in the seams…however, the holes had been filled back in with material to look like mortar. This had all been done a week ago by a special team. John used pinchers to grip one end and pull it out. He did this one more time and the two holes were now revealed.  [78 words/398 spaces]

AFTER: In the storage room, he saw a blank stone wall with wide mortar seams. Upon closer inspection, he saw two holes that a special team had filled with material resembling mortar. Using pinchers, John extracted the substance to open the holes. [45 words/265 spaces]

Here’s how we apply them to the example above:

Analysis of the BEFORE version: Inside the storage room, he was staring at a blank stone wall with wide mortar seams. But if one looked more closely, there were two holes in the seams…however, the holes had been filled back in with material to look like mortar. This had all been done a week ago by a special team. John used pinchers to grip one end and pull it out. He did this one more time and the two holes were now revealed.  [78 words/398 spaces]

Here’s one last example, followed by an exercise to test your skills!

BEFORE: John got some coffee, sat at a table, and drank it all down. He got up, threw the empty cup away, and walked on. He didn’t go back to his car. He took an escalator down to the Metro. He was instantly surrounded by a horde of commuters scrambling to make trains. He wedged in with a group trying to board the train just entering the station. [66 words/368 spaces]

AFTER: John grabbed some coffee, drank it at a table, discarded the empty cup, and departed the cafe.  Rather than returning to his car, he took an escalator to the Metro. Instantly surrounded by commuters, John wedged in with those scrambling to board a train that just arrived. [47 words/222 spaces]

BEFORE: He slid the rifle muzzle through the lower hole. This configuration would restrict his angle of aim but there was nothing he could do about that. It was what it was. He never operated in perfect conditions.

I am a retired Air Force colonel and learned years ago that powerful writing changes lives. It opens doors to opportunity and tips the balance between success and failure. Powerful writing is also the lifeblood of successful businesses and NGOs. Brilliant ideas, such those in scientific and other technical fields, never get off the drawing board because people can’t effectively explain their projects’ potential to those who make funding decisions. This type of writing is rarely taught in academia so, this has become a calling.

If you enjoyed this article and would like to help, simply spread the word through your own social media – if you know anyone associated with schools, all the better! My aim is not to sell books, it’s to empower people – especially the younger generation – and organizations by learning to leverage their own words and “Write to Influence!”

Answer to the first challenge: This is an exercise to discard useless words.

Answer to the second challenge: He slid the rifle muzzle through the lower hole. This configuration would restrict the angle of his aim. Unavoidable … operating conditions were never perfect.